Nowadays, the use of toilet paper is a matter of everyday course for us in Europe. We only think about it if someone has forgotten to replace the empty roll. But toilet paper in the Middle Ages, or even in ancient times …was there any? And what were the alternatives? We took a deep look into historical latrines.

In fact, toilet paper was first made in East Asia from so-called rice straw paper in the 6th century. Paper itself has been around since the 2nd century BC, at least as a material for packing and upholstery. In 589, the Chinese scholar Yan Zhitui was the first to mention toilet paper: “Paper on which there are quotations or commentaries from Five Classics or the names of sages, I dare not use toilet for purposes” (Needham, Science and Civilization, 123.). An Arab traveller wrote in 851 during a stay in China: “… [The Chinese] do not wash themselves with water when they have done their necessities; but they only wipe themselves with paper” (ibid.).

People have always used nature to do their business. In the Salzberg near Hallstatt, the oldest salt mine in the world, archaeologists discovered pest root leaves, which are believed to have been used as toilet paper since the Bronze Age. In Bavaria, this plant is still known today by the popular term “Arschwurzen” (ass-roots).

Furthermore, rounded ceramic pieces called pessoi (singular: pessos; English: pebbles) were used in ancient times to wipe with. According to a Greek proverb that calls for moderation, “three stones are enough to wipe”. Today, one might say that toilet paper does not grow on trees.

The procedure was a little more sophisticated in ancient Rome. There, ordinary people in public toilets sometimes shared a so-called tersorium or spongia. This is a stick with a natural sponge (from the Mediterranean) attached to the end, basically a slightly softer toilet brush

The stick had to be long because of the construction of public facilities. Roman toilets are composed of long marble benches with holes at the front (where you would need the stick) and on top. Dividing walls and doors did not exist.

Most Romans wore probably nothing underneath their tunics. So they would just pull the back of the tunic up and sit on the toilet, while the tunic’s front still covers their modesty. When they finished their ‘business’ they would wet the spongia, as there is a channel of running water at their feet. Without revealing anything – they not even had to stand up – they pushed it through the front hole and wiped themselves. After use, the sponge was rinsed on the stem in salt water or vinegar; ready to use for the next person.

An interesting article can be found here: https://www.scientificamerican.com/article/toilet-tissue-anthropologists-uncover-all-the-ways-weve-wiped/

Alternatives to toilet paper in the Middle Ages

While the East Asian population in the Middle Ages was already busy using toilet paper, the rest of the world were far from thinking about it. In Europe, wealthier people used wool, rags and scraps of fabric to wipe themselves off. The ordinary people knew how to clean themselves with leaves, moss, straw, hay or simply by hand and water. It is not without reason that the left hand is considered unclean in many cultures (especially Islamic ones). It was used to improve body hygiene, while the right hand was to eat and greet with.

When the traded toilet paper first arrived in Europe from Asia in the 11th century, it was still very expensive, so it was probably used more for writing.

In the Hanseatic city of Tartu in Estonia, a total of 3,200 textiles from medieval latrines of several households were studied. The conclusion was that the higher the social status of the inhabitants, the higher the quality of the textile residues used as toilet paper. Wealthier households left behind fine, soft pieces of wool worn clothes, sometimes even with silk appliqués.

On the other hand, rough, simple substances were found in the latrines of the socially lower households. (Riina Rammo: Textile finds from medieval cesspits in Tartu: technology, trade and consumption)

The American Joseph Gayetty is considered the inventor of modern toilet paper. In 1857, the paper was first launched on the market, not yet as a roll, but packed in boxes and soaked in aloe. The perforated toilet paper arranged in rolls as we know it today has only been around since the end of the 19th century.

Make your own chain mail!

Making your own chain mail requires a lot of patience, but it is also a deeply satisfying job. In our online shop, you’ll find all the necessary materials. 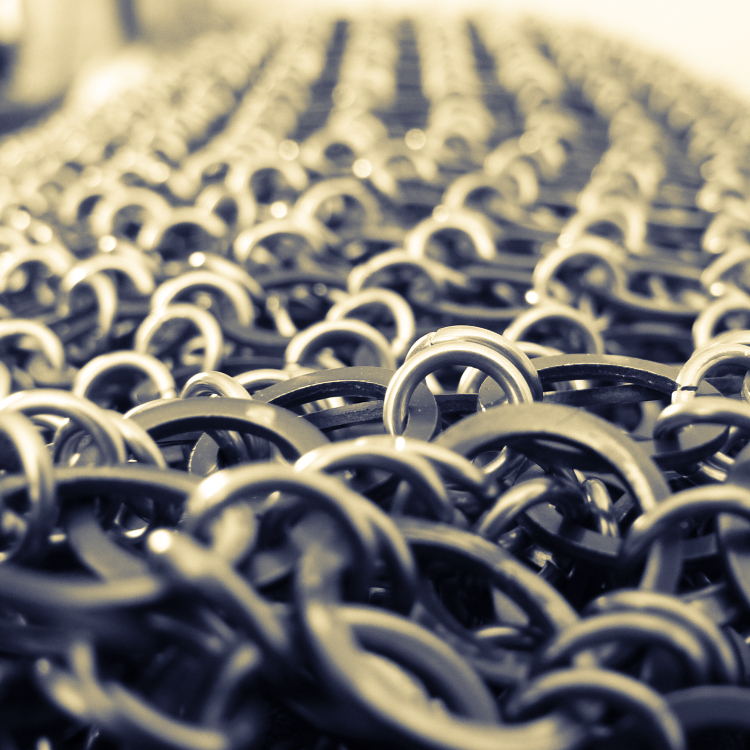